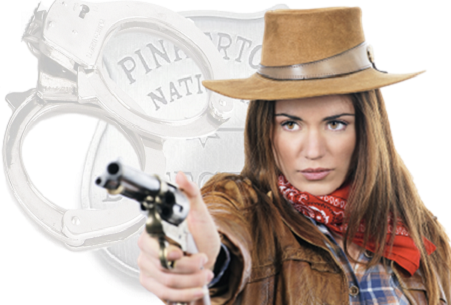 I’ve had some REALLY freaky experiences writing my Lady Law & The Gunslinger series, so I’ve decided to come out of the closet and “dish.”

First, I should probably confess that I am wholly open to the idea of Reincarnation.  You may not be.  And that’s okay.  My experiences were still weird – like, Twilight Zone weird.

Let’s start with Shady Lady, the prequel novella to Devil in Texas.  Shady Lady  (from the anthology, Pistols & Petticoats) is set in 1879, in Dodge City, and the hero is Cass, who’s the gunslinging star of the Lady Law series.

For a wager scene, I needed to invent a “prize” that would coax Wyatt Earp (one of the Deputy Marshals of Dodge) to compete with Cass. This prize needed to be significant because Cass wanted Earp to place an outrageous bet.

Suddenly, this little voice pipes up in my brain: “Make the prize an ivory-inlaid Colt.”

Then I think, “Hmm. Well, MAYBE a gun could work. But this Colt would have to be a FAMOUS Colt. A one-of-a-kind Colt. It would have to carry enough sentimental value to make readers believe that an American gun-fighting legend, like Wyatt Earp, might actually covet it” (even though technically, Earp was relatively unknown as a lawman in 1879.) Painting of Wild Bill and his famous Colts. Courtesy of Dr.DudsDicta.com

“Pearl” was born in that moment. However, the idea of Pearl raised other questions:  What kind of Colt was Pearl? (Colt manufactured dozens of revolvers.) What caliber was Pearl? And where did the brothel madam (who was staking Pearl in the contest) get such a unique and potentially infamous revolver?

So I set off on my fact-finding mission. It never occurred to me that my “idea” wasn’t just a random idea, until I started my research on the Internet.

In order for you to understand how weird my “innate expertise” on guns and Wild Bill is, let me confess:

a) I know next to nothing about revolvers, and even less about their calibers.

b) I know next to nothing about Wild Bill Hickok.

James Butler Hickok (“Wild Bill”) did, in fact, own two (count ‘em, TWO), ivory-inlaid .36 caliber Navy Colt Revolvers, which he kept in a sash that he wore around his waist. (See photo.)

I also learned that he served as a Pony Express rider, a gunfighter, and the City Marshal of Abilene, KS (a cowtown.) However, he was assassinated three years before my novella opens. He died in Deadwood, S.D. – NOT in Kansas.

When I learned that the “little whispers” in my brain could actually be verified by Internet research, I officially freaked out!  I mean, how could I have POSSIBLY known that Wild Bill carried two, ivory-inlaid Navy Colts?  (Insert Twilight Zone theme here.)

Dance to the Devil’s Tune

DENVER 1883 -- Maestro's music turns innocents into killers. While Sadie tries to trap the sinister mastermind, Cass hatches his own plot. Now every tin-star in the region wants Cass’s neck in a noose. And that includes Sadie’s boss, whose grudge is personal. Features a deadly music box, a rival diva, a traveling "Spook Show," and a comical octogenarian who talks to ghosts. Learn more.

I had the bright idea to make the villain steal an opera diva’s jewels.  But I didn’t want the jewels to be some random necklace; I wanted them to tie in with the diva's show-stopping performance.

To appreciate my Freak-Out in this incident, you need to understand that I know next to nothing about opera. (Translation: If it isn’t Carmen, I’m clueless.) That’s why I groaned at the prospect of researching hundreds, if not thousands, of operas throughout history to find a libretto that was written before 1883 and that mentioned jewelry.

Just as I was gritting my teeth and turning to Google, my trusty Muse whispered in my ear, “Faust.”

And I thought, “Huh?  Are you serious? Someone turned that novel into an OPERA?”

I'm embarrassed to admit that I have never read Goethe or Christopher Marlowe. I didn't know the storyline of Faust / Dr. Faustus, and I had only a vague idea that the Devil appears in the tale to trick the protagonists.

Deciding to humor my Muse, I surfed the internet. Sure enough, Wikipedia reported:  “Faust, an opera by French composer Charles Gounod, premiered in Paris on March 19, 1859.”

“Well, DANG,” I thought as every hair on my neck stood on end. But I’m ornery, so I challenged my Muse again.  “Okay.  Let’s see  if Faust features a song about a necklace.”

Yeah. It does. One of Act III’s most memorable arias, apparently, is titled, The Jewel Song, and is performed by the opera's main female character, Marguerite. OMG!!!

Okay.  So maybe, JUST MAYBE, I read about Faust and Wild Bill years ago, and my incredibly malleable brain filed these facts deep in my subconscious.

And maybe, JUST MAYBE, I was able to access these random memories exactly at the right moment, when I needed them. However, this explanation feels like a stretch, since I NEVER remember arbitrary numbers – like old Master Lock combinations. So how the heck would I remember that Wild Bill owned a pair of .36-caliber Colts (as opposed to .45-caliber Colts?)

And out of all the thousands of operas in creation, how did Faust pop into my brain at exactly the right moment?

I have often considered that historical eras appeal to me as a reader and a writer because they feel “comfortable” in some way.  Did I patrol the Old West as a gun-slinging crime fighter? Was I a Parisian opera diva, who thrilled 19th Century audiences as Marguerite?

No one will ever know for sure.  But the idea sure makes an interesting post!

Bawdy Songs for a Sassy Siren

Riding with the Devil in Texas: Crazy Road Trip
Scroll to top
All original content on these pages is fingerprinted and certified by Digiprove
error: Content is copyright protected!