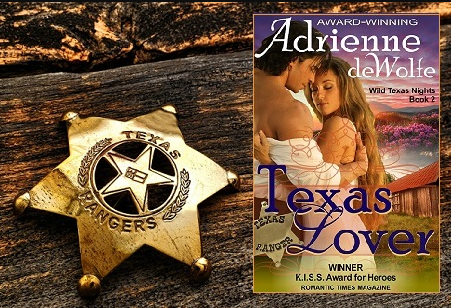 Researching Old West lawmen for my Wild Texas Nights series was a real hoot. I learned that Texas Rangers adhere to a VERY strict dress code:

Now I know that rustling isn’t funny to modern-day Texas cowboys (emu boys?), who lose hundreds of thousands of U.S. dollars in livestock every year. But the idea of emu-rustling makes me snicker: can you picture a big, brawny, pistol-packing Ranger, rounding up a giant bird that looks like an ostrich with orange eyes? (Bigfoot Wallace – a famous Texas Ranger from the Old West – is probably rolling in his grave.)

I get lots of email from folks about my characters from Wild Texas Nights. The biggest debate appears to be which of the heroes is more lovable: Cord Rawlins (U.S. Deputy Marshal from Texas Outlaw); Wes Rawlins (Texas Ranger from Texas Lover); or Zack Rawlins (Cowboy from Texas Wildcat.)

I probably shouldn’t confess that I have a favorite Rawlins brother. (I mean, they’re ALL children whom I slaved to give birth to, know what I mean?) But one of them sings. AND cooks. AND has red hair.

So I’m a goner for that one, natch.

Here’s an excerpt, featuring my favorite Rawlins brother in all his rascally charm.

After a resigned inspection of her patched-up calico skirt, Rorie blew out her lamp and headed down the stairs. She avoided the creaking floorboard in the dining room, more out of habit than necessity, but the sound of voices stopped her near the kitchen door.

"You got that batter stirred up, Topher?"

Wes's chuckle floated out to her. "And just who do you think cooks for the cattlemen, Rangers, and buffalo hunters when there aren't any womenfolk on the trail?"

She edged forward, her footsteps muffled by the rattle of pans, and furtively poked her head around the corner. What she saw left her choking on amusement.

The kitchen was in shambles. A bucket had been overturned beneath the sink, and one of the window curtains was twisted and wrinkled as if a small hand had grabbed it, probably to haul Topher up onto the sideboard to steal cookies. That hypothesis would explain why a cookie tin lay beneath a bench.

The picture grew more comical. On the table, nestled between little mountains of flour, were several discarded egg shells, each dripping the last of their remains into the powdery residue sprinkled across the floor. In fact, flour seemed to be everywhere. It decorated the milk pitcher in the imprint of a large masculine hand; it made Topher look like a ghost—or rather a raccoon, since his big blue eyes stared out from a pasty mask. The flour storm had also blown into the crevices of Wes's rolled-up sleeves and rained down on his hair, giving him a sort of confectioner's halo.

Rorie clapped a hand over her mouth to stifle a giggle when he brushed a rakish curl off his forehead, leaving a smear of white in its place. Then he began sweeping the flour mounds off the table with his forearm into a bowl.

Topher's brows furrowed, dribbling a few flakes of flour into the batter he was stirring. "Just what are slabberdabs, anyway?"

With a deft flick of his wrist, Wes broke an egg into his bowl. "Why, they're my pa's prized trail flapjacks. Pa passed the secret on to my brother, Cord, and Cord passed it on to Zack and me. Now I'm letting you in on the recipe. It's a time-honored tradition, son, and no women can ever know about it."

He fixed Topher with a stern stare. "You're going to have to take a pinky oath."

This time, Rorie clapped both hands to her mouth as Wes nodded gravely.

"Do you hereby swear to take to your grave the Rawlins brothers' secret slabberdab recipe?"

Topher linked his smallest finger with Wes's. "Ain't no woman going to pry it out of me until the worms eat out my eyeballs."

Rorie's mirth lodged in her throat when she heard a footstep behind her. She turned guiltily, blushing to think that one of the other orphans had caught her eavesdropping. Instead she recognized the squat, round form of Ginevee. Rorie hastily pressed a finger to her lips, grinning as she beckoned her friend closer.

Meanwhile, Topher was standing on a chair, straining to get a better view of Wes's bowl. "Whatcha got in there? Another secret recipe?"

"Naw. Just some biscuits. I could be making huckydummy, though, if I had raisins."

"We got raisins," Topher said brightly. Jumping back down to the floor, he blazed a trail through the flour drifts and stood on tiptoe to haul a tin container down from the shelves. "How many raisins you need?" he called as the metal lid clattered onto the floor.

"Well," Wes said thoughtfully, raising his spoon and watching the batter plop back into the bowl. "We got eight hungry people coming to breakfast, and I reckon they'll want at least two biscuits each. I figure we'll need about ten raisins per person; so how many does that make, Topher?"

The enthusiasm on Topher's face dwindled to confusion. "I don't know." He scowled. "Sixteen?"

Ginevee nudged Rorie as if to say, "That boy hasn't been doing his multiplication tables." Rorie shrugged helplessly. Topher had known the answer to eight-times-ten two weeks ago.

"No," Wes said gently. "Try again. Eight tens are how many?"

Topher's chin jutted. "I ain't any good at numbers."

The tenseness eased from Topher's shoulders. "You're not?"

and kitty's up there squallin'.

In spite of Wes's total disregard for pitch, Rorie recognized the tune because it belonged to a childhood game she had played in Cincinnati. Wes had taken liberty with the lyrics, though. Either that or he was yodeling the Texas version, because she couldn't remember singing about grizzly bears or cougars in Ohio.

Grinning from ear to ear, Topher threw back his head and helped Wes finish the refrain:

The combination of squeaky soprano and rusty baritone was so awful, so wonderfully blessed awful, that Rorie couldn't help herself. She snickered.

Ginevee, who was the county's uncontested fiddle-playing champion, covered her ears and did the same.

The next thing Rorie knew, the two of them were howling with mirth, clutching their sides, and staggering against the wall for support.

Romance Writing Courses: 50 Ways to Give Your Romance Hero Sex Appeal. Learn how to write sexual tension and love scenes from a #1 Bestselling, Award-Winning Author! 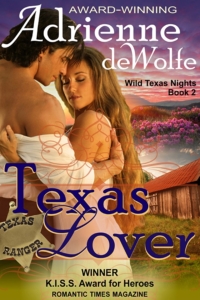 Texas Ranger Wes Rawlins has a heap of trouble on his hands. The county sheriff has been murdered, squatters are entrenched on the dead man's land, and no one can tell Wes why the sheriff wired for help in the first place.

So Wes rides out to the sheriff's farm—and finds himself looking down a gun barrel aimed by Aurora Sinclair, a spirited, young divorcée with a house full of orphans to protect.

Is Aurora an innocent schoolmarm battling an illegal land grab? Or is she a cunning temptress who plugged her lawman-lover to seize his sprawling homestead?

In this high-stakes game of cat and mouse, Wes dare not lose his head. The trouble is, he may have already lost his heart...

Victorian Spy Gadgets for a Kick-Butt Pinkerton Heroine
Scroll to top
All original content on these pages is fingerprinted and certified by Digiprove
error: Content is copyright protected!