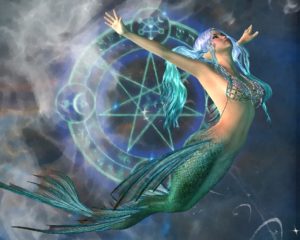 Welcome, fiction writers! You've arrived at yet another page from my personal library of research books. I’ve been collecting these magic-related writing resources for years. They combine my love of nature with my love of fantasy.

My plan is to continue updating this page with new writing resources. If you know of a book about magic, magical tradition, or magical mythology that you think other fiction writers absolutely MUST have in their personal libraries, please email me!  I’ll add your suggestions to this writing resources page.

In the meantime, if you're a Paranormal Romance writer, I have great news! You can learn how to start a Romance novel here, and you can get private coaching for your Romance writing, here.

Thanks for your help!

View our page of writing resources for Fantasy and Science Fiction Writers.

Anything written by Scott Cunningham is great for researching "nature magic."   Cunningham writes from the Wiccan point of view and includes rhymes that can be used as spell chant, as well as candle magic, knot magic, image magic, wax magic,  fire magic, water magic, wind magic, Earth magic, magical uses of herbs -- and the list goes on!

Here are some of my favorite titles by Scott Cunningham:

Magical Herbalism: The Secret Craft of the Wise

Grimoire for the Apprentice Wizard

If you (or one of your fictional characters) has ever wanted to learn how to read auras, talk to nature spirits, “cloak” your presence from other Human beings, scribe alchemical symbols, or heal with your hands – this book’s for you!

I absolutely adore this book -- and not just because the Texas Jackalope is featured amidst the hundreds of freaky fauna that parade through this Bestiary. If you’ve ever wanted a handy (illustrated) reference of every bizarre “Chimera-like” creature ever conceived by the minds of mankind, this book is for you!

Invoke Their Ageless Wisdom and Power

Teachings of the Five Inner Rings

If you're a dragon fan, these books are for you!   Conway has created an entire study of magic.  She writes that dragons dwell in other dimensions and are eager to help Humans become practitioners of a type of nature magic that will protect Earth (and the Cosmos) from an evil that she calls "The Annihilator."  Conway includes step-by-step instructions for contacting dragons in other dimensions, and for performing dragon magic rituals.  Great ideas for those of you who'd like a template for creating your own "dragon tradition" among sorcerers.

Writing in the Native American Tradition, Andrews describes the Shamanic mythology of various North American flora, landscapes, terrains and ecosystems. Included are Rites of the Seasons. One of my favorites.

Writing in the Native American Tradition, Andrews describes the Shamanic mythology of the world’s various fauna, as well as their habitats, behaviors, prey, and natural enemies. One of my favorites.

Animal-Wise: The Spirit Language and Signs of Nature

Picking up where Animal-Speak leaves off, Andrews continues to explore Shamanic and mythological traditions of the world’s animals.

Animal Magick: The Art of Recognizing and Working with Familiars

Animals from many world traditions are featured in this book.

Faery Healing: The Lore and Legacy

Focusing on self-healing and planetary healing, this book is a refreshing departure from the other fairy literature described here. McArthur details rituals and meditations for healing.

A Witch’s Guide to Faery Folk

Comprehensive and easy-to-digest, McCoy’s work is especially noteworthy for its detailed dictionary of fairies from the many cultures around the world.

Pop Quiz:  How well do you know your fae?  Are Pillywiggins friendly or malicious?  How about the Skorgrsa?  The Fossegrin?  The Merrows?

Yep.  You NEED this book, my friend.  Otherwise, while you’re lying in bed, getting your 40 winks, your milk may undergo a MOST unpleasant taste change . . .

The Fairy Bible: The Definitive Guide to the World of Fairies

Not so definitive when compared with Edain McCoy’s comprehensive dictionary of fairies from around the world (above), but Moorey’s book wins the prize for best illustrations.  Breathtakingly detailed, color plates decorate most pages of Moorey’s Fairy Bible.  As a special bonus for those of you who are writing stories in which characters must speak the language of Spells, or must figure out what “implements” are needed to work Spells, this book has some fun, contemporary ideas.  For instance, what teenager (or law student) wouldn’t be tempted to read the “Air-Spirit Spell for Exam Success?”

PLUS, you’ll learn the language of flowers.  This is vitally important research, my friend!  Imagine your heroine arranging a vase with carefully chosen flora that is meant to communicate what she thinks of her gentleman caller:  honeysuckle for fidelity, but Sweet William for treachery!

Mountain Magic:  Folk Wisdom from the Heart of Appalachia

While collecting books about magical traditions for my novel writing, I’ve found the books in Llewellyn’s World Magic Series to be consistently well-researched, comprehensive, and entertaining.

Folk Magic, Spells, and Recipes as Taught by the Wise Women of Guadalupe

Living so close to Mexico, I couldn’t pass up the opportunity to observe the work of a curandero (traditional folk healer / Shaman in Hispanic America).  He allowed me to enter his healing sanctuary.

Curanderos (or curanderas, female) are dedicated to curing physical and/or spiritual illnesses.  While they often use herbs and other natural remedies to cure illnesses, their primary healing method is the supernatural.  They believe that illness is the cause of lost malevolent spirits, a lesson from God, or a curse.  Curanderos are highly religious and spiritual, and they are deeply respected in their communities.

The Celtic spiritual tradition is an interesting blend of god/goddess worship, ancestor worship, and fairy worship. Women were highly honored in Celtic societies.  Celtic people were united in their common allegiance to the goddess, in one of her many aspects:  Maiden, Mother, or Crone. In spiritual teachings, female symbolism formed the most sacred images.  In more secular activities, the relationship with motherhood was the central element.

I just love the fact that Teutonic women had so much power in their society – largely due to the goddess Freyja. Odin, her Consort, had to make due with only half of the warrior dead, because Freyja got the rest. (The Teutonic goddess Hel was also a female to reckon with: Queen of the Underworld, Hel was the coolly impartial judge of non-warrior souls.)

Long before the Romans conquered the world – and long before the women of America FINALLY earned the right to own property and appear in courtrooms – Teutonic women were sitting on juries, divorcing unfaithful/abusive husbands, and returning home with their dowries.

Hail Freyja, Queen of Love, Magic, and the Valkyries!

This is another of my faves. Full of beautiful spell-language, honoring the Earth, and tips for living a magical life 24/7, 365 days a year.  No photos inside, unfortunately. Great research material, though!

Scroll to top
All original content on these pages is fingerprinted and certified by Digiprove
error: Content is copyright protected!