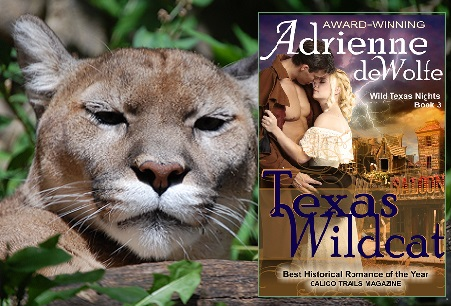 Note:  Still pining for a date for Valentine's Day?  No problem.  Sheep rancher Bailey McShane, the (aptly named) TEXAS WILDCAT from my Wild Texas Nights series of Historical Western Romances, is here to share her secrets for catching a mate!

Howdy, gals!  Bailey here. Now don’t you be moping around the homestead ‘cause some clueless male didn’t ask you to a fandango for Valentine's Day. The week's not over yet!  I got plenty of experience roping stud ponies – ‘specially the two-legged kind.  So listen up.

First off, don’t pay any mind to the prissy Missies, like that Amaryllis Larabee, who set her cap for my Zack. Prissies would have you believe that a real lady puts on lacy pink frou-frou, and totters around on stilts, and bats her eyelashes hard enough to set a prairie schooner sailing.

Hogwash.  No man worth having wants his woman trussed up in a corset. Men like a gal who WIGGLES when she walks.  You ever see a ewe in a brassiere? I rest my case!

Now once you get the ram's . . . er, I mean, the man's attention, don’t gush and giggle every time the fool opens his mouth.  Teach that randy rascal some respect!

When Hank Rotterdam and his twin sons were after my ranch, here’s how I set those cusses straight:

“Aw, c’mon, Bailey.  Why don’t you forget about Nick and marry Nate?  Hell, they look just the same.  And they got the same equipment, if you know what I mean.”

“I’ll keep that in mind, when I’m ready to raise hogs.”

You see that?  The old skirt-chaser was so floored, he didn’t even know which way was up!

Now here’s a sparkin’ tip for ya'll.  Girly punch and cucumber sandwiches ain’t gonna fire up your man’s blood!  You want some bull pawing the sod to give your skirts a whirl?  Then I got one word for you, amigas: MOONSHINE. Serve it up by the barrel.

Here’s how my 100 percent all-beef male likes to tattle on me:

Little Miss Bo Peep was so damned sure of herself, sitting over there with that mischievous smirk and that curl coiling so jauntily on her forehead. Besides, how powerful could the moonshine be?  Bailey had tossed back a belt without batting an eye.

She raised her cup a second time. "To your health, neighbor," she said solemnly.

Zack tossed back the shot and choked. Fire burned a path from his gullet to his gut.  His ears probably spewed smoke. It was all he could do not to cough and sputter as the busthead went down.

"There, there. You feel better now, don't you?"

He had to squint to glare through his watering eyes. "You sure there's no rat poison in this?"

Yee-haw!  Take it from me, gals. Tarantula juice gets the job done!  After a coupla swigs, Zack started stamping and pawing so hard, he scooped me up in his arms, hauled me up a flight of stairs and . . .

Oops!  Look at the time!  Gotta mozy on down to the barn to get those merino sheep sheared.

But before I go, I’ll leave you with one final tip.  And this one’s worth its weight in chocolate, if you know what I mean.

Do you want a man to kiss you tonight?

I’m not talking about some namby-pamby buss on the cheek.  I’m talking about a REAL man, grabbing a REAL woman, and kissing the livin’ daylights outta her. (Yeah,  I figured you’d like that.)

[Note: This scene takes place after Zack and Bailey compete in a rodeo competition. They are standing in the judges' ring, in front of all the people in the grandstands.]

"You know what your problem is?" Zack ground out, lowering his face within inches of hers. "Your daddy spoiled you rotten."

"He spoiled you and coddled you. What he should have done was turned you over his knee."

"My daddy knew how to treat a woman, Rawlins!  Which is more than I can say for you!"

That was it. The final straw. Zack had borne Bailey's public insults to his manhood too many times. In a surge of primal instinct, he grabbed her shoulders and pulled her hard against him. He heard her gasp as her heels left the ground; he saw the shock widen her eyes. Then his mouth swooped to cover hers.

For an instant, the barest of moments, she swayed on tiptoe. Her hands clutched his shirtsleeves as their chests collided. His anger was snuffed out in a flare of desire. He slanted his mouth, demanding an entry to the enticing wetness that lured him deeper.

The din ebbed; and the rodeo crowd receded. In that moment, there was only Bailey.  Her lips trembled open, and her rigid spine softened, arching, letting him mold her length to his. Her nipples were taut, rubbing against him with each shuddering breath. When she pulled him closer, his heart tripped; when his tongue thrust, she parried. He barely stifled a moan.

She was kissing him eagerly now, hungrily, demanding a response that every sizzling part of him ached to provide. But not here. Not now. God have mercy on his soul.

Abruptly he pushed her back, setting her on her feet. She blinked up at him, her eyes brimming with wonder. He heard a buzz. Growing, crescendoing, it thundered to a roar. Boots were stomping, hands were clapping, spectators in the grandstands were howling with mirth.

Dumbfounded, he stared at the lips that were so moist and swollen from his kiss.  He swallowed hard, thinking he should apologize.

He should have thought less and paid more attention. A fist like a miniature locomotive slammed into his gut.

Without a word, she turned on her heel, red-faced and tight-lipped as the snickering judges parted before her.

Wes shook his head. "You sure handled her, son." Stepping closer, he gave Zack a commiserating slap on the shoulder. "You handled her real good."

When the beautiful, hot-tempered Bailey McShane bursts into the cattlemen's saloon, waving her shotgun and accusing the cowboys of theft, simmering tempers start to boil.

Bailey wants restitution for the fence posts that some low-down cowpokes burned to steal precious water from her land.

No self-respecting cattleman would be caught dead siding with a sheep rancher, like Bailey—and yet Zack Rawlins, the youngest, elected president of the Cattlemen's Association, can't resist this pint-sized wildcat with the big blue eyes.

With drought-stricken Bandera County on the brink of range war, Zack faces political suicide if he can’t find a way to mend fences between Bailey and his cattle-ranching neighbors. But what's a cowboy to do with an unpredictable woman who refuses to be tamed?

the Best Historical Romance of the Year

by the readers of Calico Trails Magazine.

Diva to Detective: Secret Files of a Lady Pinkerton

Money Superstitions: Gambling in the Old West
Scroll to top
All original content on these pages is fingerprinted and certified by Digiprove
error: Content is copyright protected!