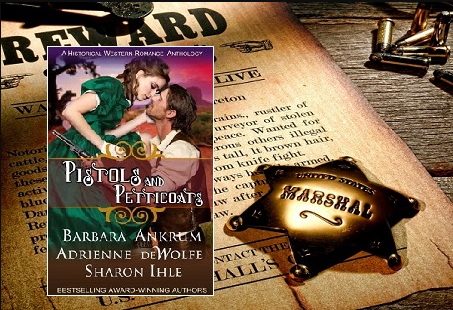 Schlock.  That’s what my high school English teacher called my best attempts at poetry when I was enrolled in his Creative Writing class.

But the joke’s on Mr. Snooty, ‘cause nowadays, I’m a bestselling author, who writes bawdy rhymes for her latest heroine:  a wise-cracking, pistol-packing Pinkerton, who works undercover as a saloon singer.

I have to admit, I’m having a ball writing schlock.  (So go suck a lemon, Mr. Snooty.)

I’m not exactly sure where the inspiration for Sadie Michelson’s songs came from.  For decades, I’ve been terrified to write anything even remotely like poetry for public consumption, thanks to a certain harrowing writing class.

To make matters worse, I get knee-knocking scared whenever I have to sing.  In another of my high-school era tragedies, I stood in an auditorium, packed with students and parents, and forgot the lyrics to my Christmas solo.

(Did I mention I HATED high school?)

Needless to say, Sadie is nothing like me.  A red-headed siren with a rapid-fire wit, my lusty heroine isn’t intimidated by corrupt lawmen, drunken hecklers, raunchy gamblers, or sniveling high school teachers.

Sadie gave me the courage to write poetry again – even if some of it might raise a stodgy eyebrow. My first attempts to "ghostwrite" bawdy songs for Sadie show up in Shady Lady (from the anthology, Pistols & Petticoats.) Shady Lady is the novella that launched the Lady Law & The Gunslinger series. Here's a snippet of Sadie's cowboy song:

"Then came a Texas cowboy,

Bulgin' at the chaps, he was,

Features deadly blood pacts, sizzling seductions, cunning gadgets, a spooky Halloween shootout, and a shocking secret from Sadie’s past. Plus, a furry mischief-maker returns from the bestselling / award-winning Velvet Lies Series! (Purchase on Amazon and wherever ebooks are sold. Also available in paperback.)

Sadie sings the previous verse about her hot-headed, gun-slinging lover, whom rival bawds dubbed the Rebel Rutter.  (I’ll leave the reason to your imagination.)  William “Cass” Cassidy also sings bawdy songs, as you’ll see in the excerpted scene, below, from Shady Lady.

But not all of my lyrics are bawdy. (Darn, huh?)  To tell new readers -- fast -- about the star-crossed lovers' tumultuous affair in Dodge, I penned my favorite ballad (Lucifire) for Chapter 2 of my Historical Western Romance, Devil in Texas, (Book 1 of the series.)  I also wrote a sort of anthem -- or theme song -- for their love. An especially ironic version of that song, Destiny, will be published in Book 2, Dance to the Devil's Tune, this autumn.

Here’s a sneak preview of Destiny from Devil in Texas:

Suns may rise, stars may fail.

Through all time, you and me,

So now you’re probably wondering:  Did I ever muster the courage to sing solos again?  Yes, I did!  Years and years later (in another state, under another name,) I appeared in a variety show.  Nobody booed.  (And I’m pretty sure none of them were comatose!)

A Novella from the #1 Bestselling Anthology,

He recalled that Sadie turned into a fire-breathing dragon if someone dared to interrupt her creative frenzies. He cocked his head, plotting his strategy to whisk her off to the river.

His ornery lover was sitting with her spine propped up by pillows against the headboard of her unmade bed. Her glorious red-gold curls tumbled in every conceivable direction over the sagging, ebony lace of her night wrapper. A sea of yellowed papers surrounded her exquisitely long legs, bared up to the thighs. Those papers had lots of black lines, little bitty symbols, and tea-cup stains.

In fact, the whole room smelled like mint and rosehips, Sadie’s favorite brew. The teapot – and a pair of greasy, sunny-side-up eggs – sat forgotten where she’d left them: on a chipped china platter atop the traveling trunk at the foot of her bed.

“The sun is shining!” he cajoled.

“Yes, well, it’s daylight, isn’t it?” she retorted absently, her bare toes wiggling to some inner rhythm as she scribbled a few more symbols on the paper in her lap.

She’d barely glanced his way. He steeled himself against a flare of temper. He was Coyote Cass, after all. He could charm the rattle off of rattlers.

Strolling to the side of the bed, he was careful to keep his expression enthusiastic rather than provocative. There would be plenty of time for romping in the daisies and buttercups, where he planned to spread a blanket, pop a bottle of champagne, and practice all the creative ways that he'd learned how to use whipped cream and berries since their first wild, adolescent ride so many years ago.

“What’s that chubby, black dot with the flagpole rising out of it?” he asked, knowing full well that it was a musical symbol.

“What kind of music?” he persisted, undaunted by her growl.

She blew a curl off her forehead. “The usual kind.”

Her stylus paused as those tawny Tiger eyes glared up at him. He just loved when Sadie glared. He didn’t mind arguing with the hellcat one bit. Not when her make-up sex was so divine.

“When have you ever heard me sing about love?” she snapped.

She muttered something under her breath that sounded like, “Dreamer.”

Smirking, he thought fast. The only person in the world who thrived on competition more than he did was Sadie. Calling upon a credible baritone – one that she had once described as “lyrical” – he belted out an improvised rhyme:

“With looks that drive the gals insane,

“Not bad,” she conceded grudgingly. “Where did you hear that? From Wilma’s piano player?”

She hiked a challenging eyebrow. “Right here? On the spot?”

Hooking his thumbs over his gun belt, he swaggered around the room, acting adorable.

“He rides like greased lightning atop his black steed,

To rescue the damsel, alone in her bed

From cold eggs and boredom and songs in her head.

Away to the river, he carries the lass

“Cass!” she shrieked, her laughter ringing through the room in merry peals.

He chuckled, enjoying her earthy humor.  “I reckon Cass rhymes, too.”

"You are a pest. And pests should be spanked."

"Never argue with a lady. That's my motto."

"Is it, now?" She tossed aside her stylus and swung her naked feet to the floor. "Since when?"

He'd lost the use of his brain the moment she'd started shrugging off that scanty black waterfall of lace. Nothing but freckles adorned her alabaster flesh now.

"Maybe you've confused me with someone else, lover," she drawled.

She was prowling closer, all sizzle and sin. By the time she halted before him, his loins were hot, and his mouth was watering. Those wicked, feline eyes laughed up at him.

"Do I look like a damsel in distress to you?"

"Uh... " Trick question, some lucid part of his brain warned. "You look like my heaven," he rallied gamely.

“Aw.  Isn’t that sweet?”  A dimple flirted with her cherry-red lips. "Who taught you how to lie so prettily? That Injun half-breed?"

Sadly, this novella is no longer available for sale.

We miss your shining light, Sharon!

Reincarnation: Did I REALLY Live in the Old West?
Scroll to top
All original content on these pages is fingerprinted and certified by Digiprove
error: Content is copyright protected!