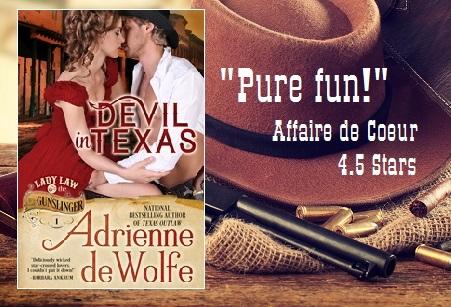 One Saturday morning, while sucking down enough caffeine and sugar to make my eyes float, a Writer Pal asked, “So where are you going to set your next historical western?”

I mumbled something about throwing a dart at a map and hoping it missed the cat.

So another Writer Pal piped up, “Ever hear of Lampasas?”

I blinked blankly at her. “Lam what?”

“The Saratoga of the South! The Railroad Boomtown! The home of the notorious gunfighter, Pink Higgins! It’s 90 miles north of your house, for crying out loud!”

Lost in my sugar fog, I was still trying to figure out why any parents would name their son Pink. (Could be the reason the kid became a killer -- just sayin’.)

Suddenly, somebody shouted, “Road trip!” The next thing I knew, my Yankee derriere was being dragged out the door by two caffeine-crazed Texans, who thought nothing of driving 100 mph on a Toll Road with nachos in their laps. Splattered with queso, we finally arrived in a sleepy, Hill Country town that boasts some of the wildest history in Texas. (How could I not have heard of Lampasas?!)

With their gift for yarn-spinning, my Writer Pals brought to life a fascinating past. I could almost hear the Comanche war cries at the famed mineral springs and the Rebel Yells of masked vigilantes, hunting down horse thieves. I imagined I smelled gunpowder where the Texas Rangers tried to stop Pink Higgins from annihilating the Horrell brothers.

However, if we’re talking true confessions, the notion of setting a love scene in a bathhouse was what really sold me on the idea of Lampasas as the backdrop for Devil in Texas, (Book 1, Lady Law & The Gunslinger.) In drought-stricken Texas, in 1883, the town was a tourist and convalescent mecca, thanks to its mineral springs.

Needless to say, I was chomping at the bit to drive to Hancock Park and view the last surviving building from Lampasas’s legendary health resort. I was anticipating a Victorian palace, complete with puffs of mineral-scented air, steam cabinets, and massage chambers -- in short, a structure reminiscent of Bathhouse Row in Hot Springs, Arkansas (where the oldest bathhouse dates to 1892.)

Boy, was I surprised! The sulfur springs in Lampasas aren’t thermal. In fact, they’re cold enough to give a polar bear brain freeze -- in mid-summer. My next surprise was that Lampasas’s historic, bathhouse looked like a limestone longhouse. It was far more rustic than romantic.

Faced with the reality of my research, I couldn’t envision Cass and Sadie having their midnight rendezvous at the famous pool in Hancock Park. So I did what any self-respecting author would do: I got creative! I invented “Aquacia Bathhouse,” which I describe like a Spanish mission, complete with a red mansard roof and white stucco walls. The indoor pool is a cross between a Polynesian lagoon and a Mexican grotto. (What can I say? When I imagine scenery, I go whole hog!)

Of course, the great fun of writing Cass and Sadie -- in any scene -- is their dialogue. Here’s a sneak peek of their rendezvous at Aquacia Bathhouse.

"I don't suppose you paid to enter this bathhouse after hours," Sadie accused.

"Why rent a pool when you own a lock pick?" Cass quipped.

"Is that a confession, hooligan?"

"Are you going to arrest me?" he countered hopefully.

"Then I confess. I hate to swim. Especially when I'm butt-naked and all alone."

Now he was knifing through the water, heading on a collision course with her. She glimpsed taut buttocks, gleaming like snow-capped hillocks in the lunar light. She was almost sorry when the show ended. He surfaced before her, a cascade of liquid emerald rolling off moon-chiseled shoulders and an abdomen that might have been cut from white granite. A little growl of admiration rumbled in her throat.

"Where's my pendant, felon?" she rallied.

"Reckon you'll have to search me for it, detective."

His head lowered, and his tongue slid along her bottom lip.

That's when she remembered, to her utter mortification, she was still wearing the whiskers from her disguise.

But Cass, being Cass, was thoroughly amused by the sheer wrongness of kissing a bearded woman. He rubbed his chin against her chin. He nibbled the bristly end of her mustache. From the corner of her eye, she glimpsed his dimples. Darling. Devilish. Dangerous to any female with a functioning brain.

So what did that say about her?

Pinkerton Agent Sadie Michelson poses as a casino singer to investigate a Texas Senator. Before she can cozy up to her quarry, she must get past his bodyguard, William Cassidy, her long-lost lover.

An outlaw seeking redemption, Cass was lured to Texas by the promise of a Ranger badge. But he hasn’t forgotten the sassy siren, who toyed with his heart. When Sadie proposes a truce, Cass suspects she’s hiding something.

Purchase Devil in Texas on Amazon

Reincarnation: Did I REALLY Live in the Old West?

Diva to Detective: Secret Files of a Lady Pinkerton
Scroll to top
All original content on these pages is fingerprinted and certified by Digiprove
error: Content is copyright protected!