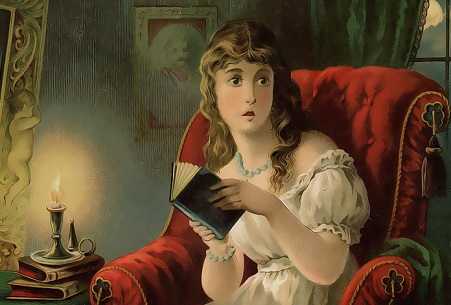 Want to keep your Cozy Mystery reader turning pages? Then read on! Today's guest columnist is Nancy J. Cohen, sleuth writer extraordinaire. Nancy is the author of the writer's guidebook, Writing the Cozy Mystery, and she comes bearing gifts!  Readers who comment on today's post will receive an ecopy of her mystery novel, Hanging By A Hair, from her Bad Hair Day series. 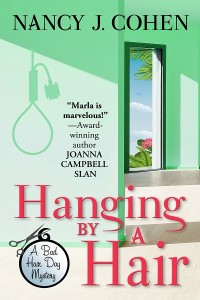 Readers of cozy mysteries expect a series to be a microcosm of some aspect of society that’s unfamiliar to them. They want to learn and immerse themselves in this world. So choose a premise that no one has done before. What if you want to write a culinary mystery? Your protagonist doesn’t have to be a chef. She can be a food critic, a taster for a food magazine, a food truck owner, or a farmer’s market vendor. Think up an angle that’s within the parameters of the career you want but make it different from where others have gone before.

Have Settings that Sizzle

Select a location that has a character of its own, and highlight it with foods distinctive to the region, local festivals, holidays, plants and wildlife, and other ways that make your locale unique. Then pepper your setting with sensory details to bring it to life. What if you want to write about a place someone else has already done? Select a corner away from this other person’s sphere. For example, both Elaine Viets and I write humorous mysteries set around Fort Lauderdale. But she writes about east Fort Lauderdale and I write about a western suburb. They’re completely different environments although sharing some landmarks in common.

Having likable characters is critical, because readers will come back to your series for the people you create. They might expect a mystery in each story, but they’re choosing your books because they want to see what happens to the protagonist. So make your sleuth someone you’d like to know as a friend. Give her quirky colleagues, family members and friends. Have your sleuth grow and change, realizing truths about herself with each story. Her relationships should fluctuate, mature and expand like in real life. Your suspects should also have connections to each other, because it’s these hidden secrets that your sleuth will uncover. Thus the focus of your stories should be on character relationships rather than on crime scene details.

As I say in my book, Writing the Cozy Mystery:

While you can introduce new characters in subsequent books, your readers will be looking to the recurrent cast for a feeling of welcome. They will become interested in the lives of these people and how they interact with your protagonist. This immersion in your imaginary world will propel them to buy the next story to see what happens to your heroine.

What makes the opening scene capture the reader’s interest? It’s best to open with dialogue or action and keep backstory to a minimum. New authors of the genre may want to put the body up front. Once the murder happens, the story can focus on solving the crime. Whodunit, and why? The latter term refers not only to the killer’s motive but also to the sleuth’s reason for getting involved. Give your protagonist a personal angle for wanting to solve the murder. Upping the stakes for the heroine creates tension and snags the reader.

Each scene should have a purpose. Don’t have anyone chatting aimlessly. Do you need to give information in a scene? Reveal an aspect of character? Offer comic relief? Or give your characters down time from a fast-paced sequence? Every action should be followed by reaction and reflection. The story should flow in a logical manner. Make each scene count and if possible, add conflict to every conversation.

Throw in Twists and Turns

Your road to unveiling the killer should be full of twists and turns. Kill off the main suspect. If he’s dead, who else might be guilty? Have a promising trail lead to a dead end. Invite an unexpected character to make an entrance. Defy expectations by having two villains. Your goal is to misdirect the reader to keep her guessing until the end.

Whodunit readers expect a puzzle to solve. Play fair and leave enough clues so they can see where they went astray at the end. While you want to trick your fans, you don’t want to have the villain appear on stage for the first time halfway through the book or have a storm sweep the killer out to sea at the last minute. Read enough cozies so you understand the conventions and how these books differ from other crime fiction.

Even when you have a scene with the protagonist working at her job or doing chores at home, don’t make it easy. Let her wrestle with personal problems that interfere with her crime-solving abilities. Have ghosts from the past come back to haunt her. Or have a thorny relationship distract her. She has to deal with these problems in order to move ahead in life. We want to see her succeed in overcoming her troubles and not just defeat the villain.

How the reader feels when he closes the book is what influences his desire to purchase your next story. You may include a hook for the sequel, but make sure the mystery in this novel is completely solved and all loose ends are tied up. Have your main character grow and change so there’s a sense of emotional satisfaction as well. Then insert a teaser for the next story if you wish. You may want to create a series arc that takes place over several installments. This could be a romantic subplot, a problematic relationship with a relative, or the mystery of a missing heirloom.

Have a Marketing Plan

If you are pitching your work to an editor, you might get asked about a marketing plan. Be prepared ahead of time. Will you be doing a blog tour? Taking out ads in online magazines? Promoting on your social networks? Doing a book launch party? Establish yourself online now, so you already have a platform when your book is published. Know your target market and then start finding your readers.

In conclusion, create likeable characters, offer a new and different environment, maintain the tension and play fair to your readers, and you’ll be well on your way toward a successful series. 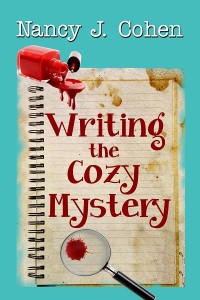 Do you want to write a mystery but don’t have a clue where to start? Or maybe you’ve begun a story but are stuck on the plot? Perhaps you’re already writing a series, and you need tips on keeping track of your material? Writing the Cozy Mystery is a valuable instructional tool that will help you develop your characters, establish the setting, plot the story, add suspense, plant clues and sustain your series. 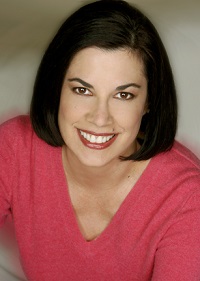 How to Promote Your eBook with an Excerpt
Scroll to top
All original content on these pages is fingerprinted and certified by Digiprove
error: Content is copyright protected!